The City of Globe  Summer Swim Season starts on Monday (May 28).

The Globe Community Center pool will be open every day, weather permitting, until August 1.

For information about swimming lessons call 200-3445.

Posted by Roland at 9:15 AM No comments:

The Town of Miami is having a Memorial Day Ceremony on Monday at 9:am. It's at Miami Veterans Memorial Park on Sullivan Street.

There will be light refreshments after the ceremony.

Posted by Roland at 9:11 AM No comments:

Renew the “G” Team invites you to a luncheon on Wednesday, June 6 to acknowledge the completion of the “G” project.

The program at the Globe Active Adult Center begins at 11:00 with lunch served at Noon. A donation for the lunch is appreciated. Make your reservation by calling 425-9030.

After lunch the dedication of the Rose Mofford Trail will be held on G Hill. For more information call 812-3974.

Posted by Roland at 8:54 AM No comments:

Globe Police are investigating a burglary at Globe High School.

Posted by Roland at 8:46 AM No comments:

High Kerlin Keller  passed away Monday at his home in Globe. He was 83. He is survived by 9 children, including Donna Mikeworth and Aaron Keller of Globe; his brother; 30 grandchildren and 36 great grandchildren.
A graveside service for High Keller will be held today (Friday) at 11:00 at Globe Cemetery.

Robyn Chewy Boni of San Carlos passed away Sunday at the age of 27. She is survived by her son Rueben; her parents Daniel and Kathy Perry, Jr.; 4 brothers and 2 sisters.
The wake for Robyn Boni is today (Friday) at 4:pm at the Nathan Perry residence. The funeral is tomorrow (Saturday) at 1:pm. at Burdette Hall.

Naomi Bolinger of Globe passed away Wednesday at Copper Mountain Inn. She was 89.
Visitation for Naomi Bolinger will be Monday from 5 to 7:pm at Miles Funeral Services Globe. The funeral is Tuesday at 10:am.

Posted by Roland at 8:40 AM No comments:

The Gila County Historical Museum monthly hamburger fry starts Friday at 5:30pm on the museum grounds. The cost is $7 a person.

The meal features a hamburger and all the trimkings, chips, beans, salads, desserts and a drink.

Members of the local square dance club will entertain beginning about 6:pm.

Gila Community College is offering “More Kids in the Woods” science camps to local students this summer. The program is presented in partnership with the US Forest Service, the U of A Cooperative Exrtension, and Eastern Arizona College Gear-Up.

There will be four camps split by grade level. The program is designed to help students in grades K-12 create an awareness of the environment and to become more actively involved in their education.

Posted by Roland at 9:57 AM No comments:

The Friends of the Globe Public Library are having their Spring Book Sale at the library today (Thursday) and tomorrow from 9 to 5, and Saturday from 9 to Noon.

Posted by Roland at 9:49 AM No comments:

39 year old Arthur Dunbar was arrested for shoplifting at Walmart.

Officers are investigating a theft in the area of South Street; a burglary at a residence on Monroe Street; and a report of threats taken at the Express Stop.

The Maricopa County Sheriff’s Office arrested 55 year old Gerald Hall of Claypool for failure to register as a sex offender.

Posted by Roland at 9:47 AM No comments: 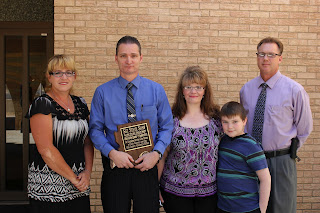 The Gila County Attorney’s Office has named Globe Police Sergeant. Steve Shaw, Officer of the Quarter.  The award was presented to Sgt. Shaw at the Gila County Board of Supervisor’s meeting on Tuesday.

Sergeant Shaw has been with the Globe Police Department for almost 20 years. He has been a detective, agent with the Gila County Narcotics Task Force, patrol sergeant and currently detective sergeant.


The Gila County Meth Coalition in partnership with the Arizona Diamondbacks recently gave away tickets to the May 12, 2012 game against the San Francisco Giants.  This is a picture of  some of the participants.
Posted by Roland at 10:24 AM No comments:

The Globe Public Library will have a benefit car wash in the library parking lot on Saturday, June 2.  All proceeds will go to Relay for Life. For information about helping with the car wash or their Relay fior Life team, call Emily at 928-275-0047.

The Globe Library also has two basket  raffles for 50 cents a ticket.

You can also get your name on a footprint for $1 to be displayed on the wall behind the front desk. Luminaries are also available at the library.

For information about any of these activities call the Globe Public Library at 425-6111.

Posted by Roland at 9:45 AM No comments:

An analysis released by the Violence Policy Center says Arizona has more deaths from firearms than from motor vehicle crashes. The study says that in 2009, there were  809 people  killed in vehicle crashes and there were 856 gun deaths.

The Tucson Sentinel reports that Arizona is one of ten states where more people were killed by guns than in crashes.

The national figures show around 31,000  firearm deaths and around 36,000 deaths from crashes.
Charles Heller of the Arizona Citizens Defense League calls the report politically motivated. He says Japan has a higher suicide rate than the US and “none of that is from guns.”
Posted by Roland at 9:27 AM No comments:

High Keller passed away Monday at his home in Globe. He was 83.
A graveside service for High Keller will be held Friday at 11:am at Globe Cemetery.

Posted by Roland at 9:06 AM No comments:

Games will be played on Tuesday and Thursday evenings at Trujillo Softball Field at the Globe Community Center. All games will be double headers. The league will run for seven weeks for a total of 14 games. A double elimination tournament will be held at the end of the season to determine a league champion.

A minimum of six teams are needed with a maximum of 10.

The fee for the league is $300 a team. Registration will be accepted until 3:pm on Thursday, June 7. Manager’s packets are available at Globe City Hall.

The Pinal Mountain Foundation for Higher Education will host its annual golf tournament on Saturday, June 16 at the Cobre Valley Country Club. The event is a 3-person scramble.

The cost is $45 a person. This includes lunch and it’s tax deductible. All funds raised will go to help students attending Gila Community College Gila Pueblo and San Carlos campuses with textbooks and tuition.

For team registration of more information about the golf tournament call 928-812-0098.

Posted by Roland at 9:55 AM No comments:

The Gila County Board of Supervisors meets this morning (Tuesday) at 10:00.

Gila Conty Attorney Daisy Flores will introduce the Officer of the Quarter, Sgt. Steve Shaw of the Globe Police Departement.

There will be a Public Hearing on a State Community Development Block Grant application for a proposed housing rehabilitation project in Gila County.

Another Public Hearing is about a proposed $10 fee for Sexually Transmitted Infections testing.

They will consider discontinuing the 120-day hiring freeze for budgeted County positions.

And the Supervisors will consider a $3,200 Economic Development Grant to the Town of Miami for construction and repair of the Miami Community Pool.

Posted by Roland at 9:46 AM No comments:

Miami Police responded to a domestic disturbance at a residence on Sunset Avenue. A 14 year old  juvenile was charged with disorderly conduct/domestic violence.

Officers are investigating a burglary at the Food Bank.

Kearny Police arrested 41 year old Noah Madala of Globe on a probation violation warrant for use of a dangerous drug, use of a narcotic drug, use of marijuana, and possession of drug paraphernalia.

Kearny Police arrested 20 year old Jesse Miller of Globe on a failure to appear warrant for theft of means of transportation and possession of drug paraphernalia; and a failure to comply warrant for assault.

Deputies are investigating a report of theft of gas from a vehicle at Holiday Hills Mobile Home Park and a burglary at a residece on Van Winkle Canyon.

Posted by Roland at 9:27 AM No comments:

Former Globe resident Gilbert C. Navarro passed away at his home in Santa Paula, California. He was 77. He is survived by his wife Patricia; 2 sons; 3 sisters, including Margaret Smith of Globe; and 2 grandchildren.
A Memorial Mass for “Pancho” Navarro will be held Friday at 10:30am at Holy Angels Catholic Church.

Posted by Roland at 9:09 AM No comments:

The Council will also determine which Councilmembers and staff will attend the Arizona League of Cities and Towns Conference in August.

Posted by Roland at 9:58 AM No comments:

Globe City Council meets tonight (Monday) at 6:00. They will hear the annual presentations of the Economic Development Corporation and the Gila County Historical Society.

The Council will discuss and possibly adopt the 2012-2013 Tentative Budget.

They will also consider authorizing the City Manager to apply for a Transportation Enhancement Grant.
Posted by Roland at 9:54 AM No comments:

The Town of Miami will have a Memorial Day Ceremony next Monday, May 28. It will be at 9:am at Veterans Memorial Park on Sullivan Street.

There will be light refreshments after the ceremony.

Posted by Roland at 9:50 AM No comments:

The Arizona Department of Health Services says that a 6 year old Gila County girl is the first child death of the flu season. The Department says the child fell victim to a strand of flu called Influenza B.

The Arizona Republic reports that tests are being conducted to determine if that particular strand was protected by this year’s vaccine, but the Department says the girl also had an underlying medical condition that put her at risk.

This year’s vaccination protected against two strands of Influenza A, but only one strand of Influenza B.
Posted by Roland at 9:45 AM No comments:

Former San Carlos resident Janice Polk of Tucson passed away May 15 at Mountain Vista Medical Center in Mesa. She was 66.
She is survived by 3 daughters, including Angela Bendle of San Carlos; her sisters Claudette Dan and Regina Bead of San Carlos; 11 grandchildren and 9 great grandchildren.
The wake for Janice Polk will be Saturday at 4:pm at Claudette Dan’s residence. The funeral is Sunday at 2:pm at Burdette Hall.

Posted by Roland at 9:41 AM No comments:

Miami Police and several citizens were able to control a brush fire on Reppy Avenue until the Miami Fire Department arrived.

Nobody was hurt in a three vehicle accident yesterday afternoon at the Highway 60/70 junction.

A semi knocked down a cable line late Friday morning in the area of Gordon Street.

Globe Police arrested  48 year old Joseph Jayne for threats and intimidation/domestic violence after a disturbance at a residence on South Fifth Street.

Saturday night around midnight an officer took a report of a stolen vehicle on Hill Street. The vehicle was later located in front of the residence and 30 year old Lyndon Thompson was contacted in the area. Thompson was found to have an outstanding warrant for shoplifting. He was booked into the Gila County Jail. 18 year old Shaun Moser was arrested for false reporting to law enforcement after it was learned that the vehicle was never stolen.

On Friday Globe Police arrested 35 year old Troy Goodman on a failure to comply warrant for threats and intimidation, and telephone harassment.

Officers are investigating a report of child abuse taken at Copper Country Mobile Home Park; a fight at a business on Jess Hayes Road; shoplifting at a business on Broad Street; and a criminal damage report taken in the area of Pinaleno Pass.

The Sheriff’s Office arrested two people on Saturday after a disturbance in the area of El Camino and Broadway. 29 year old Gregory Carpenter and 26 year old Elsie Robb, both  of Apache Junction,  were arrested for disorderly conduct and domestic violence.

27 year old Eddie Benavidez of Springerville was arrested in the area of the Shamrock Bar for threats and intimidation, and assault.

31 year old Jimmy Golden was arrested Friday for assault and domestic violence after a disturbance on Westridge Drive.

Miami Police cited James Evans for reckless burning after he burned a large quantity of wood in his back yard.

Posted by Roland at 9:13 AM No comments: